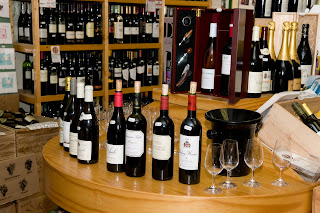 The “Wow factor” wasn’t bad as the line-up was as follows:

The Saint Veran was very well received
and showed extremely well against the more expensive
Chablis and Meursault (all Chardonnays French-style..)
The Meursault being an oak-fermented and aged Chardonnay took some tasters by surprise. The poor old Chardonnay grape, behind some of the greatest white wines in the world (Chablis / All White Burgundies / Macon) and yet pretty much universally scorned and derided (and impossible to sell if labelled as Chardonnay! ) Rosemount, Wolf Blass and those other “oaky” Aussie numbers have a lot to answer for..they’ve put a lot of wine drinkers off Chardonnay for life!
The Cloudy Bay Sauvignon Blanc was a real winner with tasters, clean and fresh with plenty of zip, citrus bite and interest. It’s a true Icon Wine in that it put New Zealand and Marlborough region on the world wine map for top-quality Sauvignon Blanc. Its certainly arguable now that there are other Marlborough producers giving Cloudy Bay a challenge at half the price, but Cloudy Bay has built up its name and reputation over the years and people still get a kick out of tasting the wine or even getting their hands on a bottle..
Its not quite the Holy Grail of wine that it used to be but its definitely one to try for any budding wine buff.

I put in the Mas Laval Les Pampres ( a wine from Aniane in the Languedoc) to see how it fared against the more expensive, stellar Bordeaux names of Margaux and Pomerol and it fared pretty damn well..its very well priced for the quality you’re getting..I often recommend this one to customers in the shop (who like French wine..) as I think its one of our best. We only get 25 cases per annum since it’s a small “in-demand” winery.
The Domaine Zede Margaux 2004 was showing very nicely with a beautiful open nose of black fruit, oak and a smooth, supple tannic structure. By contrast the 2006 Pomerol was very tight, it needs another few years to show its best. You could put this wine in a decanter for a few hours as it seemed to open up a bit, over the few hours of the tasting.

The star of the reds was the Chateau Musar from Lebanon.. as a friend of mine put it so very well by text recently when I recommended he try it..MUSAR IS KING! What a wine..great complexity of smooth fruit and spice..it changes in the glass as you drink it..its really funky stuff. Watch out for the sediment in the end of the bottle. There is usually quite a bit as Musar is only released for sale after seven years. If you’re a red wine fan you have to try it.

Overall an interesting little tasting...thanks to all who attended!
Posted by Nectar Wines Blog at 11:01 AM No comments: