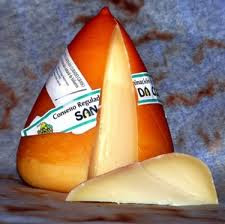 Thanks to everyone who attended our Cheese & Wine Tasting last Friday.
We'd a great turnout and there was hardly any cheese or wine left over
for myself and Harry to snaffle!(I took that as a good sign that the various
combinations had gone down well!)

Our line-up was as follows:


A “mystery cheese” turned up aswell. It arrived fresh off the plane from Galicia.
Many Thanks to Paula and Viv for bringing this little beauty along!
We found out that its called “San Simon” It looked amazing and tasted wonderful!

Here are some more details..

San Simon is a popular smoked Spanish cheese. It is made from cow's milk in the region of Galicia in the northwest of the country. The curd is transferred into pear-shaped molds, after a day, the forms are immersed in hot whey. After two weeks, the cheeses are smoked. The gourmet San Simon cheese has a delicious, creamy buttery texture. The cheese has a thin chestnut-orange rind, a soft inside and is mild but full of flavor. This versatile cheese is great on its own, and sublime when paired with fresh fruit or served as a dessert cheese.
Posted by Nectar Wines Blog at 11:43 AM No comments: