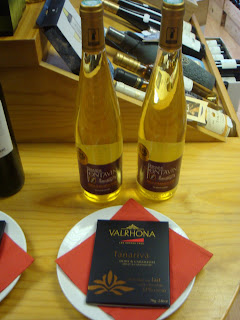 I found this “milk chocolate” to be quite fascinating in that there’s a distinct caramel flavour going on. This is apparently down to the character of the cocoa bean varieties and plantations in Madagascar that Valrhona select in making this chocolate. Just as with coffee beans, different cocoa beans produce various flavours and aromas in the final chocolate. The sweet and “grapey” Muscat worked well in creating a luscious, honeyed and creamy sensation together with the chocolate.

Overall..a “choctastic” wine tasting!
Posted by Nectar Wines Blog at 11:47 AM No comments: Links to this post 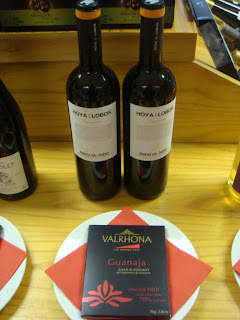 We paired up the dark, oaky Ribera red with the darkest of the dark chocolate options, the 70% Guanaja (named after the Caribbean island where Christopher Columbus landed in 1502)
The chocolate and wine both possess a smoky, spicy allure and this match worked very well also. I was picking up a coffee/mocha impression from this pairing, which was very nice indeed!
I’m told “Los Lobos” means “the wolves” in Spanish..I thought they were an 80’s band famous for the worldwide smash La Bamba..Oh well you live and learn.
Posted by Nectar Wines Blog at 11:42 AM No comments: Links to this post 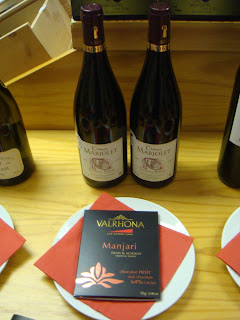 Cotes du Rhone is generally considered to be in the “fruity” spectrum of wine styles so we paired up the Chateau Marjolet 2009 (a great vintage by the way!) with the Manjari 64%. Something about the fruity, fresh and tangy character of the Manjari worked really well with this wine. My favourite combo, this was definitely one of our more successful matches!
Posted by Nectar Wines Blog at 11:38 AM No comments: Links to this post

I for one (and one for all..) did my best to get into the spirit of Liberté, Egalité et Fraternité, and to toast the idea of general revolution I enjoyed a lovely bottle of French white wine.

“Les Fumées Blanches” takes its name from the light morning mists, which drift like white smoke over the foothill vineyards. In these relatively cool microclimates, Sauvignon Blanc develops the smoky, slightly pungent aromas, which are part of the unique personality of this grape.

Or if you fancy practicing your French..

The wine is simply labelled “Vin de France” a new designation which has come along to help the French Wine Industry compete with New World Wines. The general idea is to loosen up the Appellation Controlée laws in the south of France, to allow more freedoms to winemakers in making fruit-forward, easy-going, commercial wines. For example they can put the grape name on the label of these wines to help the consumer identify the wine style. This particular wine won a gold medal in the "Concours Mondial du Sauvignon 2010"

Strangely enough when I put my nose in this wine my first thought was “New Zealand” as the nose is really quite pungent and “Marlborough” in style. On the palate we’re straight back in France with a smoky, mineral, crisp and subtle flavour profile.Its a very tasty wine, which would be lovely with Goats Cheese and a good foil for slightly spicy Thai or Chinese chicken dishes. Excellent as an “Aperitif” wine also!

Santé!!
Posted by Nectar Wines Blog at 8:13 AM No comments: Links to this post